I've added Oceans to the Globe on Dash Deck Explorer!

Hi all, I’ve added some custom Ocean geojson polygons to the Dash Deck Explorer GLOBE to make it look more like the planet! I’ve also improved colouring of the power stations (now by all fuel types), and hover tips. I can’t tell you how much pain it took to clean and transform the Natural Earth ocean polygons to get it to work. 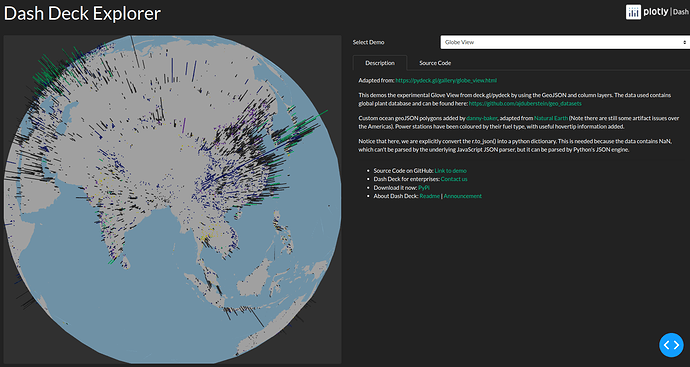 In addition to the globe tweaks, I’ve also updated the pull request to bring dash-deck-explorer up to Dash 2.0. I’m not sure if anyone is maintaining this repo anymore but just thought I’d flag it

Hi xhlulu. This is my first pull request to a public repo, so I hope this works.… Anyway, I've created a feature branch that you can consider for merging **Notes** - Because modules were not fixed to versions, since Dash 2.0 came out and pydeck has been updated, a bunch of stuff has broken and the repo wouldn't run locally. - I've fixed Dash version and bootstrap to the highest version before Dash2.0. I've also rolled back pydeck to the latest version that I could get to run. - Fixed ALL module versions in requirements.txt to get app working (might need some tweaks) - Added my custom ocean geojson for the globe view. This took me literally days to make as there were many errors that meant the Natural Earth physical ocean data WILL NOT RUN natively on the globe. I had to translate it, and remove some problematic polygons. The result is, the globe now has oceans!! - I've also made some improvements to the formatting, colouring all the different fuel types, adding more useful hovertip data, and I've narrowed the columns so they are thinner and look waaaaay better. - I needed to add the ocean geojson (2MB) to the actual repo in a new folder /data. Unfortunately you can't host raw user content in geojson format, like has been done for the csv data (or I would have done it). So you may want to move this to a cloud store? Or just deal with it as it's only 2MB. **Outstanding issues** 1. An error is thrown when locally installing requirements. It's the top line in the requirements.txt. Assume this is not a major issue and is something used in the production build (I actually don't know what that top line does) 2. Some of the other visualisations don't display the mapbox tiles as they do on the production site, again, assume there might be a reason for this. If not, it might be the pydeck version I had to roll back to to get the app to run. ![Screenshot from 2022-04-17 17-48-54](https://user-images.githubusercontent.com/12868840/163702535-055022a0-8044-482d-9af4-f2efca1cd028.png) I hope you like my globe tweaks