Using Dash in an offline environment

Getting started with Dash

Prerequisites Domino 3.0+ Access to the Domino Analytics Distribution Py3.6 R3.4 standard environment Overview This article will show you how to publish a Python App with Dash in Domino 3.0+ In...

I’m in a offline env behind corporate Firewall so I need all resources available offline.

If I try to publish the example of the Guide it keeps loading for ever and the Console Shows:

If I inspect the Elemenets its clear that it trys to open scripts from sources that are unavailable:
unpkg[dot]com

I played around and used:

But I still get this error:

I then abandoned the Domino Guide and looked at plot.lys own Dash Installation - Guide

dash automatically installs dash-renderer, dash-core-components, dash-html-components, and dash-table, using known-compatible versions of each. You need not and should not install these separately any longer, only dash itself.

So I tried switching my Dockerfile Instructions to:

But I changed dash to 1.3.1 since our local repo doesn’t have a higher Version.

Now if I publish an App there is no more “Loading…”, but also nothing shows up.

I checked the Elements:

and it Looks up the scripts local and can reach them now!

But the console has some new errors:

It doesn’t matter if i use True/False:

But only If i use pathname prefix the Favicon appears on the tab and the .js are reachable

I really could need some help on why my dash doesn’t render.

Thanks for every Respons and Idea!

This is my current app.py 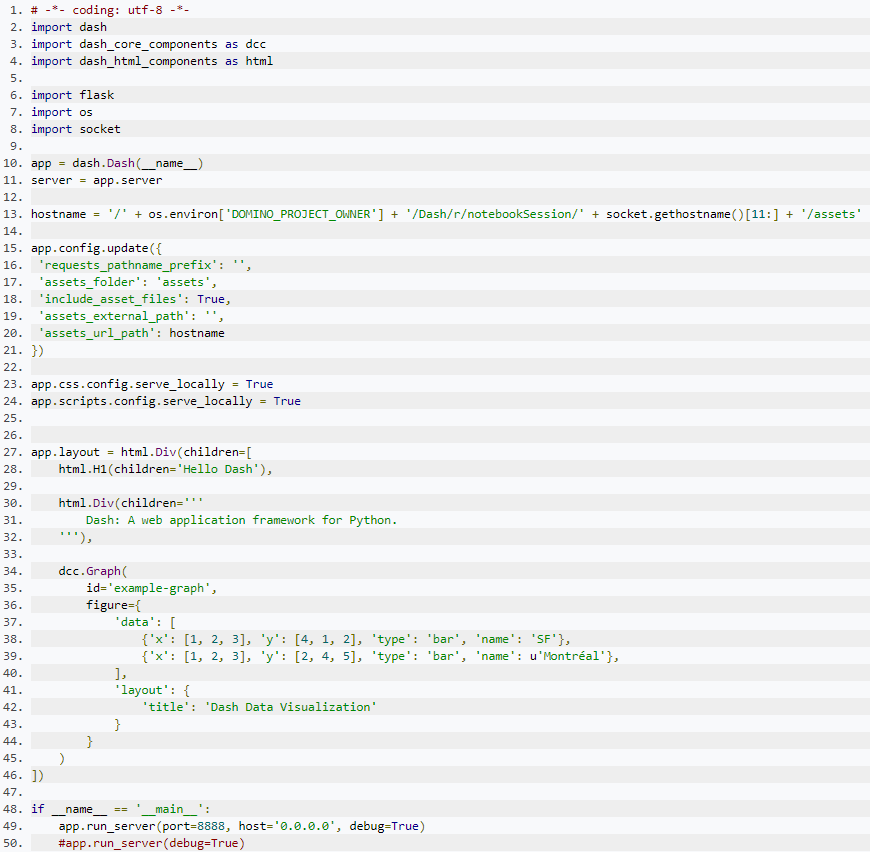 Using a relative requests_pathname_prefix (ie not starting with a /) is not really a use case we support. I also notice that Domino article was written with a pretty ancient version of dash (0.22.0) so I’m not surprised it has some problems with modern versions of Dash. I don’t really know much about Domino, you might want to raise this question with them.

I found a solution:

I shouldn’t have used “assets_url_path” and instead “requests_pathname_prefix” that it can find all local resources in the right place.

It works now for me, thanks for your help!