I tried following the instruction installing the Dash daq
https://dash.plot.ly/installation

When I try to call other controls from daq. I don’t see another control (i.e BooleanSwitch, ToggleSwitch, StopButton,…etc) 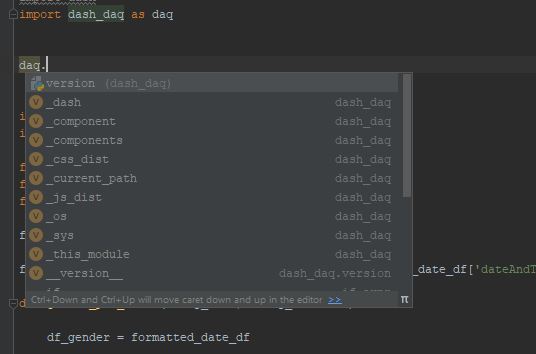 I am having the same problem, but only when I use the dash-daq in my flask app. If I just run a simple Dash app the normal way, the daqs work.

But still have the same problem- I cannot access any of the components of the daq library if put on my Flask app.

After importing, my editor (Visual Studio for Ubuntu) thinks it has imported dash_daq as daq, but like you, there are no components that it finds.

I would really like to use some the DAQ components, has anyone figured this out yet?

Just a wild guess, have you tried installing it with pip3 instead of pip? What version of Python is shown on the status bar of VS ?
Version 3 or version 2? pip3 can be used for installing modules into the Python 3 environment. Hope it helps.