Update: version 5.2.1 was released since this was posted.

I’m happy to announce that today we have released version 5.0 of Plotly.py, our flagship data visualization library! For up-to-date installation and upgrading instructions, please see our Getting Started documentation page and if you run into trouble, check out our Troubleshooting Guide.

Our official changelog has details and links to individual pull requests, but here are the highlights:

Our commitment to semantic versioning requires us to make this release a major version bump (up from 4.14.3) because we are upgrading to version 2.1 of the underlying Plotly.js library, which makes some backwards-incompatible changes to older and deprecated features (see below), but we see this as a low-risk maintenance release and we expect that the vast majority of users should plan to upgrade without fearing significant issues!

The following features are being dropped or deprecated:

The following changes have been made to library defaults:

This release of Plotly.py bumps Plotly.js from 1.58.4 to 2.1, so we recommend that interested users check out our Plotly.js 2.0 release announcement, which includes more in-depth information to the breaking changes in the underlying library. The Plotly.js 2.0 work was partly funded by Equinor, and we thank them on behalf of the community

The major improvement in Plotly.py 5.0 is a much better mechanism for accessing Plotly figures in JupyterLab. JupyterLab 3 added support for “prebuilt” extensions that can be installed via pip or conda automatically, and thanks to an epic community pull request, the two Plotly extensions (jupyterlab-plotly and plotlywidget) have been combined into one prebuilt extension which lazy-loads the large Plotly.js bundle. The upshot of this is that if you’re using JupyterLab 3, you’ll can just pip install plotly (once 5.0 is released!) and you’ll always automatically have the right version of the extension loaded!

Thank you so much to community member @fcollonval for the contribution and for their patience in working through our release process!

Bar charts, histograms and polar bar charts have large markers which support not only a fill color, but as of version 5.0, also an optional pattern (also known as “hatching” or “texture”). This can be used for a variety of reasons:

Do you like plotly's sunburst charts but wish they were less circular, but also less nested than treemaps? Then our new icicle charts are for you! They can work in any direction: left to right (or vice versa) for nice text layout, top-down and bluish for the classic icicle look, or bottom up and reddish for the classic flame chart! 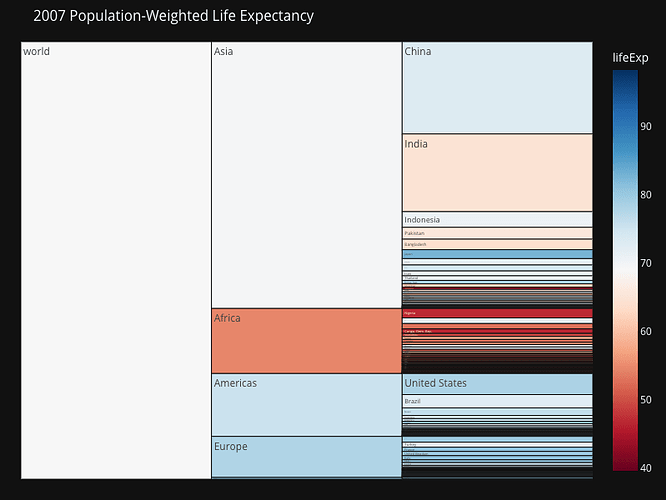 This feature was developed by our former colleagues @Kully and @mtwichan of Zyphr and we thank them and their sponsors at Virgin Hyperloop!

A commonly-requested feature is the ability to reorder a figure’s legend items without needing to change the order in which traces appear in the data object. The new legendrank attribute addresses this need: the default rank is 1000, meaning that any trace can be sent to the bottom of the list if it is the only one with a rank greater than 1000, and the same goes for moving traces to the top of the list with ranks less than 1000. Ties are broken using the current position-in-data logic.

This feature was anonymously sponsored, and we thank our sponsors

One core performance bottleneck when rendering plotly figures is that they are automatically, internally serialized to a JSON string format for rendering in the browser. This can be quite slow by default for figures containing large numpy arrays or pandas data frames. In this release we have made some progress towards speeding this up, using an optional dependency on the excellent orjson library. When orjson is installed, Plotly.py will automatically leverage it to perform JSON serialization, which can result in 5x-10x performance improvements when the figure contains large arrays.

Version 5.0 of Plotly.py is based on version 2.1 of Plotly.js, whereas the latest version of Dash is 1.20.0, which is based on Plotly.js 1.58.4. This means that new rendering features like the icicle charts, bar patterns and legend ranks will not be usable in Dash until the next release of Dash, or unless a 2.1 JS bundle is placed in the app’s assets directory. The next version of Dash will have Plotly.js 2.1 built-in and is expected in the coming days.

To sum up: Plotly.py 5.0 is out and if you’re excited about any of the above features, head on over to our Getting Started documentation page for full installation instructions!

In Case You Missed It: Previous Release Announcements

This is incredible work, thanks to the whole Plotly team !

Just a small question about the area trace type that has been dropped in 5.0 : what would be the most efficient way to reproduce such a graph ? 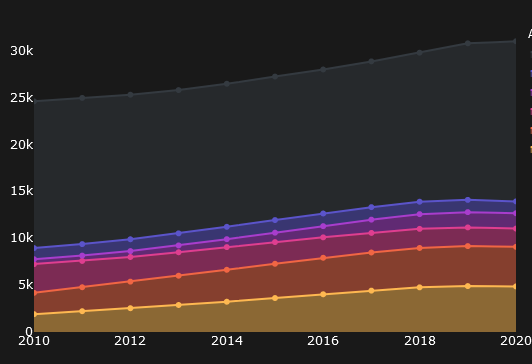 Thanks in advance ! Cheers.

Good question! The Area trace type was actually totally unused and undocumented in v4, and in fact the px.area() function does not use the Area trace, so you can continue using px.area() as you have been

So in the announcement it was stated that:

The next version of Dash will have Plotly.js 2.1 built-in and is expected in the coming days.

Any ETA on this plotly.js 2.1 supported, new version of Dash? Its close to two weeks since this announcement and I was expecting the version bump to occur the same week as plotly 5.0 was released; which I thought was implied from the “in the coming days” part of the statement. Not complaining but it would be great to know what that means. Thanks!

Right, I was hoping we’d have been able to release a new version of Dash by now but things keep getting in the way. I’ll do my best to have it out this week!

Hi All,
I was super excited about the new Icicle Chart that is now possible with Plotly version >=5.0, so I created a tutorial about it to help people learn. If you have any questions, feel free to let me know. 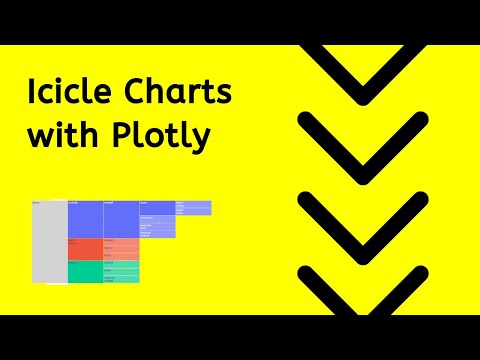 I hope you enjoy your Plotly learning journey.

I have also same issue any suggestion for this so please reply Thanks in advance. Keep it up.

Is there a way to apply the hatching to a timeline? Doesn’t seem possible as per the documentation, but hoping someone has a way.

It’s not supported right now but it should be fairly easy for us to add.

That would be amazing! Accessibility is a priority for our reports, so we try to never rely on color alone. In the meantime, I’ll look for a color-blind-friendly color schema.

I’ve just merged support for this, so it will be available in plotly v5.9

umm, this is incredible support!

16 days from comment on forum to feature release! #goals