In yesterday’s Dash 2.0 webinar, there were a surprising (to me!) number of questions asking if we “allow multiple callbacks to update the same output.”

I wanted to kick off a discussion of this topic.

How to do this today

Here is what I believe users expect to be able to do:

If you run this example, you’ll receive this error message:

We could support the unsupported example as an official part of the Dash API. Community member’s @Emil 's excellent dash-extensions library has MultiplexerTransform which implements this with a dcc.Store technique. I suspect that we if we supported this in Dash we would try to wire in the triggered option above into the dash library so that no extra requests are made and no dcc.Store's are necessary.

That being said, there are some API challenges and trade-offs to supporting multiple callbacks targeting the same output:

Beyond that, I’d love to hear the community’s thoughts on the tradeoffs above and if you have any other suggestions for this problem. Thanks for reading!

6 Likes
Duplicate Callback Outputs Issue
Multiple outputs in a single/multiple callback(s)
Why can an output only have a single callback function?
How to update Dash DataTable via two callbacks: button click and interval?
Update graph on clickData not working
What is the fundamental reason that Dash choose to not allow multiple callbacks for same output?
Can't we make a callback function that shares output?
xhlu August 26, 2021, 3:29am #2

Theoretically, I think of components*props as nodes, callbacks as directed edges, and callback functions as colors of the edges. So if two callback functions target the same components, it’d be simply two differently colored edges targeting the same node. So the b->d arrow would have a different color from the c->d edge.

There was lots of discussion about this in Github here: Duplicate Outputs[Feature Request] · Issue #850 · plotly/dash · GitHub

One particularly thorny variant that was discussed was to have two callbacks that are meant to target the same output but also have shared inputs.

Having introduced Dash to a few people, I can confirm that the duplicate callback outputs issue is typically their first complaint - so I am not surprised that this particular question was raised. They implemented more-or-less exactly the structure of your “what users expect to be able to do” example, and when I then presented (a form of) your “canonical example” they responded with something along the lines of “but why does it have to be that complicated?”. They don’t want to know about a (complicated) context object, nor pollute their code with loads of conditional statements. And to be honest, I kind of feel the same.

I understand the design choice from an implementation perspective, but the syntax is not intuitive, nor simple. It feels like the technical solution is driving the syntax, but I generally think that it should be the other way around. Since people kind-of-agree on how the syntax should be (your “what users expect to be able to do” example) I would vote for adopting this syntax (who doesn’t love intuitive frameworks?), and then just solve whatever technical challenges arise. This design philosophy was also the driver of the design of the MultiplexerTransform.

I tend to agree with @Emil on this. I understand the technical considerations, and the potential tradeoffs, and as someone reasonably well-versed in managing complexity in a Dash app, this is still the feature that I spend the most time thinking about.

For me, Dash is about making serious web app development approachable for someone in my position, who is comfortable in Python but has minimal web background. This is (for me) a more important feature than the component design ‘guide’ presented in Dash 2.0 (which I also consider a step in the right direction). If there is a way to make a more intuitive syntax available (while also making clear the tradeoffs to consider when electing to use it), I would be absolutely for it. Even a @dash.multiplexed_callback() or similar that offers a solution to composability that makes it clear that it’s (under the hood) different to a regular callback, is something I would be very happy with.

In my scenario, I am saving state based on a different sections of my webpage. For example

As you can see I have a different Bootstrap card where there are buttons and many input fields like dropdown, input, DateTime picker, etc. Now sync all of them (ex. keeping a global state in the app) I want to modify the Store().

Here I can use the callback context approach but the function will become huge. Like I have to give Input() for all of them. Instead What I did is I use the button callback to modify the Store() as well as the other properties in the Card. And this resulted in the duplicate callback.

I think there could be a better solution for this. Can anyone point me out?

Did you try the MultiplexerTransform? 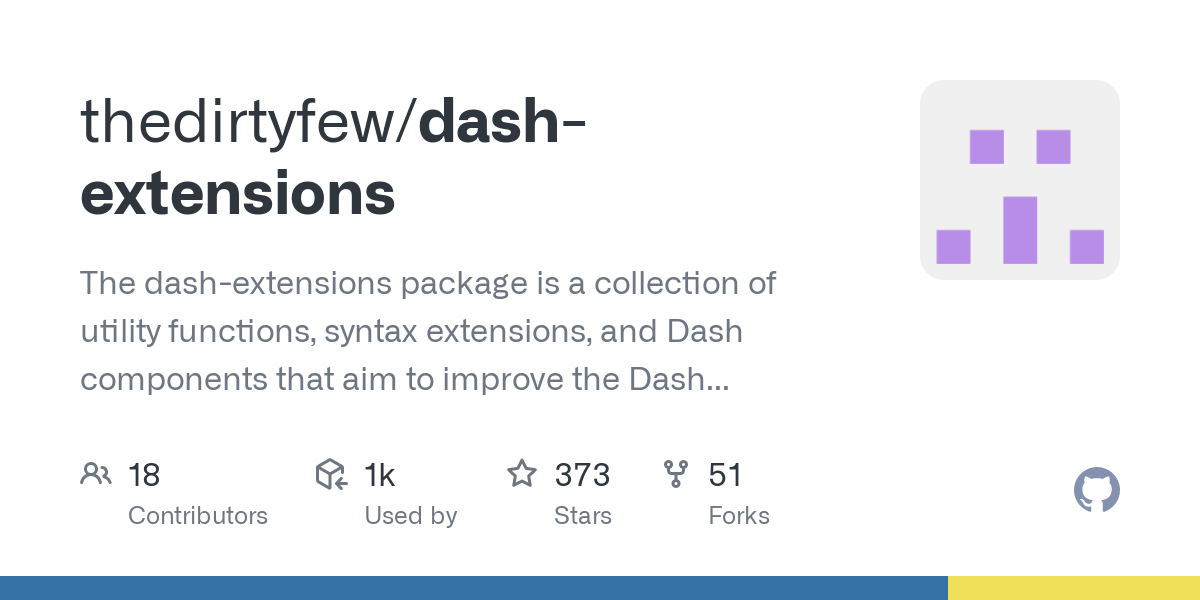 triggered syntax - Another solution would be to provide a more ergonomic

For example, we could make a new triggered_dict that would have the same content but be a dictionary instead of a list. The logic would become:

which would save another line of code.

I can’t believe I missed this gem in @chriddyp original post, but I’d like to give it

I think making a new triggered dict would make the code so much more readable. To me, this is meaningless boilerplate:

I agree that a better way of interacting with the callback_context is desirable. Especially when working with pattern-matching callbacks. Doing things like this is not fun and it creates a huge space for hard-to-discover bugs.

Hey @sislvacl - I remember that post and I agree.

There is a lot of exciting work being done right now to reduce boilerplate and make Dash easier to use. Dash V2.1 is going to be really cool. I just added this feature request on Github and included your comments. Hopefully this will make it into a future Dash release!

My use case for multiple callbacks with the same output is the following:

In a multi-page app, I save the state of a “project” via a Store component. The callbacks that update that store:

I have been using an equivalent of the MultiplexerTransform with multiple stores that synchronise with the main store but even this has its limitations in my context.

My use case for multiple callbacks with the same output is the following:

In this scenario, which output is the “same output”? Does each page have e.g. the same graph?

Also, do certain controls/inputs in one page update outputs in other pages (via store)?

It’s more to keep track of the changes made by the user during their session so that they can save them to the cloud (database, json file or other, in my case I’m using a nosql db) once they are happy with the work. It’s a bit of a staging area keeping track of everything that has changed.

Another use case for multi-callback for an output in this app is URL redirection. Certain actions on certain pages need to redirect the app to a page (e.g. if not logged in redirect to the login page, after logging in the user is redirected to the home page, after creating a new project the user is redirected to the project page). To do that, I need to update my Location component but can’t do it from different pages due to the variety of Inputs. I am also doing that with the Store synchronisation at the moment.

In the case of the master callack dispatching what to do based on callback context, I got the feeling that the changes induced by the callback are not able to trigger again the master callback (in case where some of the outputs are also inputs). Is that the case ?

Here is a schematic example:

At the end of the import procedure, it re-assigns a new value to the checklist CL… which should in turn trigger again the master callback to update the visibility of the 3 Divs based on the box that are checked. But it’s not calling the master callback again according to my observations…

First of all, good that you started this topic as this pops up super often.

Based on my experience with Dash, current limitations (no multiple callbacks referring to the same output) are perfectly fine for a simple app. It’s getting difficult when you have more complex business logic.

For instance, right now I have to combine two callbacks having ~200 lines of code each to bypass this limitation. Is it doable? Yes. Is it nice and clean? Not really.

From you perspective, I would mostly worry about the fact that so many new and entry users are complaining about it as it might quickly push them back from Dash.

I think the triggered example works well for simple use cases like the one presented, which affect a “major” component in the page that’s likely to be interacted very directly with in a limited way.

But I really don’t see how one could realistically use that technique for more “generic” use cases such as:

I’m trying to incorporate this for my application. For simplicity I have left out the rest of my code and if I were to leave out the “well_slider” input and leave callback and function as is. This works for just for implementing the add row button. My objective is to have two ways of increasing rows for this table I’m creating. (Honestly I don’t know why I would like both options and honestly could be talked out of having both) Either way I would like to incorporate each for user options if one is easier then the other.

The problem for me is handling the null conditions for complex inputs. I have 3 different Dataset subclasses (tabular, sequence, image) that all ultimately produce a Prediction. however, their inputs are wildy different: uploaded file v.s. a diverse list of inputs with pattern matching. I don’t want to have to zero them all out in a monolith callback. it would be simpler to have them be separate callbacks.

based on the Model’s data type, the green button would have a different id, which would trigger a different callback, which inserts a Prediction on the right. zero chance it goes wrong.

I have the code I need to do the seq/img data, but don’t want to add the complexity to the app, so i am just leaving it as tabular data only for right now. i think that’s why this issue is so frustrating for people. you go all the way down a road only to discover that road is blocked.

I’m glad that dash-extensions MultiplexerTransform thing exists and is somewhat endorsed, but who knows what else that does? when i looked at the readme it wasn’t even using the Dash() class. i want to use dash.

@HashRocketSyntax I am happy that you like the MultiplexerTransform! It simply modifies you callbacks slightly to allow targeting an output multiple times, nothing more, nothing less. The enrich module of dash-extensions is a light wrapper around the normal Dash code, so if you are using the MultiplexerTransform (or any other part of the enrich module), you are indeed using Dash