I’ve been following the Arrow project and have messed around a bit with Apache Plasma as a shared-memory data backend. Has anyone else used this? It provides incredible performance boosts compared to reading large data from disk, caching large objects, or other things. I was reading things in for each callback with Parquet (which is already fast) and experienced write speedups of about 5x and read speedups of 10-50x because though there is serialization, it’s all in memory.

Some of my Dash projects involve

So, because we can’t use global variables

So this means that I need a super fast, relatively simple way to read large new objects into memory and then share them between functions.

Out with the (excellent) old - Parquet

This was/is fine…but from a user experience perspective, it’s just not enough. Users want to see things change when they click buttons.

Read this for detail.

This is based off/part of Apache Arrow. It’s kind of like Redis but can be used with very large objects. For small objects I still just use JSON or Pickle files on the disk/network.

From their docs (above) on Pandas integration - basic python objects are much easier, just object_id = client.put(thing) and client.get(object_id), my code is just a function for writing and a function for reading, plus a Pickle-d dictionary index on disk that keeps track of object IDs.

Anyways, I hope that some of you find this info useful - it’s certainly helped me speed up my massive-data Dash apps and increase the amount of functionality I can give to users. The only limitations I see so far are that the API is not stable and use is limited to Arrow-compatible objects. But given that Pandas, Numpy, and almost all common Python objects are compatible, I’ve found it perfect for my uses.

11 Likes
Dynamic Use of Global Data
How can I get value from dcc.Input from current to use it for the calculation on the other page?
ghavranek April 26, 2019, 2:30pm #2

Thanks for this example. I also work with very large data sets and build applications that rely heavily on user input. So, I am always on the lookout for more speed and will definitely try Plasma on my next project. (I currently use Redis and serialize the data with Arrow.)

One thing that is slightly confusing to me is object serialization. Looking at your write-up and at the Plasma page, it reads as if no serialization/deserialization is required to store/extract a Pandas dataframe from Plasma. Is this true?

You do need to convert the dataframe into a pyarrow.RecordBatch in memory in this example, as in

If you’re here, see my new post on this - I’ve built a module, brain-plasma, with a basic API for a shared-memory object namespace for Python objects on top of the Plasma API - it simplifies this process significantly.

As mentioned here I’ve been using Apache Plasma to solve what is still one of Dash’s biggest problems: sharing large data between callbacks, apps, and pages. Now I’ve roughly formalized some of that functionality in the PyPi package brain-plasma. It’s a simple and easy-to-use way to store Python objects, even very large Pandas dataframes or dictionaries, in a shared memory space. This method offers (imperfect, but much better) thread safety, blazing speed relative to reading from disk or Redis,… 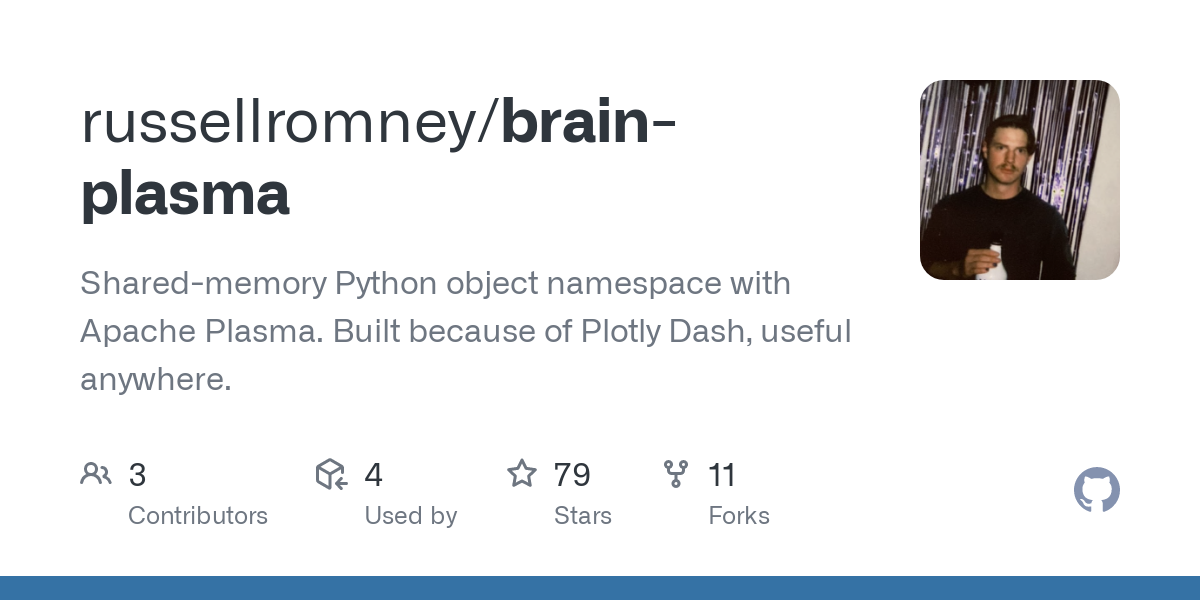