interesting, would be nice to test size limits depending on… what? browser? hardware? other also?

Data URI Limits
The data URI spec does not define a size limit but says applications may impose their own.

the URI specs are very useful, thanks!

That’s why, excellent, thanks!

Here is another approach that works for larger files:

I’m still having this same issue, even when I import urllib.parse instead of urllib.

I just copied/pasted the example, and the download link returns the same csv of html. 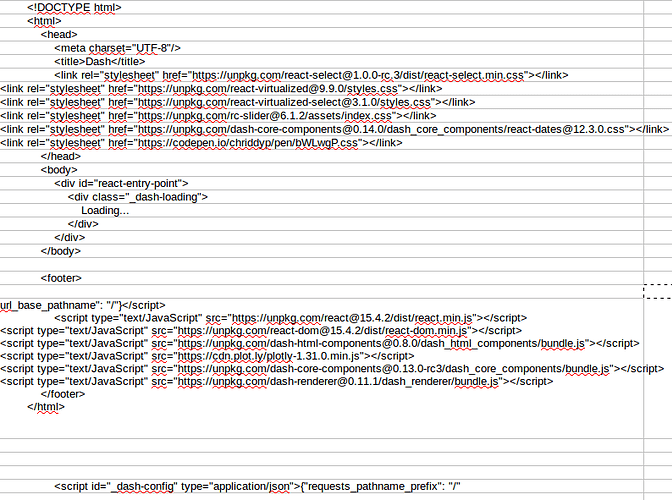 I just copied/pasted the example, and the download link returns the same csv of html.

Hm, I’m not sure why this isn’t working. You haven’t made any changes to the example that I posted above?

Which browser are you on?

Try inspecting the <a/> element that is rendered on the page, in particular its href property. The href property should be updated from the callback. Here’s what it looks like for me:

I checked, my href property is empty, so it’s not being updated from the callback? What can I do about that?

Weird, I don’t know why this isn’t uploading.

You could also check:

in addition to chris’’ notes:

Do you have the following statement in your code?:
app.config['supress_callback_exceptions']=True

When I had problems with callbacks that are not updating, I wasn’t able to debug, because of my own settings. Set to “False” to receive an error when trying to call a callback.

A post was split to a new topic: Dash DataTable - Downloading Selected Rows

Thanks for your help and the examples, much appreciated. I forgot to update my solution but in the end it was a very small thing - I’m using Python 3 and needed to replace urllib.quote with urllib.parse.quote

I noticed the data URI works in Chrome if you remove href="_blank".

2 questions:
1- can one download links save several files at once… say i want to split the table into two and save both halves as separate files?
2- can i change the path the file is getting saved to?

@chriddyp @carlottanegri Is it possible to change encoding? Excel will automatically open csv link, but encoding is incorrectly. I have to manually use txt to change encoding into ansi, and reopen with excel. I also tried to modify ‘utf-8’ to ‘ansi’. But it does not work… any suggestion?

I made two changes to the callback in @chriddyp’s example.

The final callback is:

Yes! That did it. Tested it in Chrome and Firefox. Thanks to everybody for this.

@chriddyp, how can we do the same thing by creating the file with a unique name in the server and link that file to a download button or the html.A? For example, the link can be http://serverip/filename.xlsx.
I tried, but as I am developing in a local setting, I put the file in the current working directory. However, the html.A creates a link like "127.0.0.1:8050/file1.xlsx. I am not sure where to put that file so that I can link and download it.

Anybody know if its possible to do this with data that’s being pulled from a db to populate a table, specifically a MySQL db?