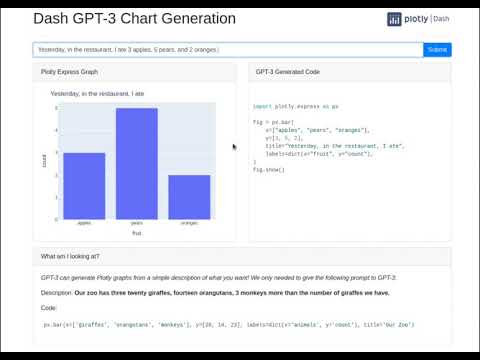 This Dash app lets you write a simple description, and GPT-3 can automatically generate the PX code to produce a bar chart for you.

It was able to learn how to generate Plotly Express code from this one code snippet:

What’s impressive is that it is able to generate bar charts with very nuanced descriptions. If you spend hours and maybe days on finetuning a LSTM or create a regex parser, you might be able to retrieve exact numbers and plot them on the graph. However, if you want to give rather vague descriptions (e.g. we have “X apples, Y bananas, and many more pears”, then it will guess a number that is appropriate.

Moreover, it is somewhat capable of inferring arithmetic operations, although it does make mistakes. For example, if you say that “my mother is X years old, and my dad is Y years older”, it will give a number that is close to X + Y, but might not be exact. Similarly, if you say that someone was born in a certain year (DOB), it might give an age that is approximate to 2020 - DOB, but might also fail to give the correct age. 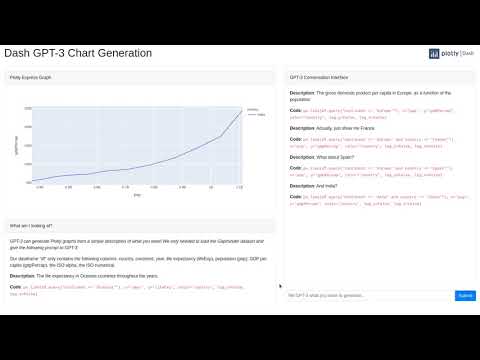 This demo shows not only how to use GPT-3 to not only generate line charts using a given dataset (in this case, the Gapminder dataset), but also updates it in real-time with only natural language queries.

Again, we only gave this prompt to GPT-3:

Then, you can start interacting with GPT-3 by asking it to generate a different plot by simply describing what you want. Let’s take this as an example:

Here, we asked for the “Gross Domestic Product per person over time in Europe” and it correctly plotted gdpPerCap as a function of years, even though neither of those variables was mentioned in our query. Just like the previous demo, this shows that GPT-3 correctly inferred the correct arguments to our function call without requiring explicit variable names.

Moreover, it seems that it has learned its deal of pandas during training since it is able to compose slightly more complex queries. For example, you can ask it to focus on a specific country in Europe:

and it is able to compose a valid pandas query. Here’s how the plotly.express figure was updated:

In addition to the examples above, GPT-3 is able to understand various changes you request, such as the value of the y-axis or whether the plot should be on the log scale or not: 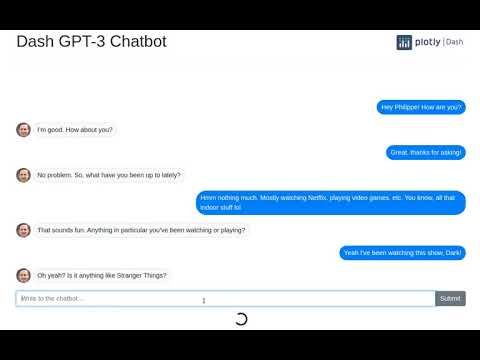 Although generating charts is an extremely useful application of both Dash and Plotly.py, we wanted to see GPT-3’s capabilities in holding a realistic conversation, and perhaps even pass the Turing test. Overall, we were surprisingly pleased with GPT-3. By building the entire conversation UI with Dash Bootstrap Components (no Javascript needed), and generating the image with StyleGAN v2, we were able to achieve a realistic chatbot interface.

By releasing the source code, we hope that it could become a useful template or resource for building your own chatbot interface using Dash. In this case, the conversation area (the gray and blue boxes) is encapsulated in a single 20-lines function.

We also included a link to a previous chatbot demo we built. You can directly try this demo in Jupyter Notebooks.

In order to use GPT-3, you will need to gain access to the beta program and retrieve your API key. To do that, sign up on OpenAI Beta API and join the waitlist. Once the access is granted, you can try out the API through the playground and try our demos locally.

Our API key is managed by our DE App manager. You can also export the OPENAI_KEY locally to run our apps (instructions in the READMEs). We do not recommend hard coding your secret key in your Python files, since this might be leaked or changed after deployment.

Interesting use case, can’t wait to see a demo of it!

If you’d like to use networks with Dash, highly recommend to check out Dash Cytoscape, which was recently updated to v0.2.0. It wraps around cytoscape.js, and adds so Dash-specific features.

Hey all! The video for our second demo is available here:

It shows GPT-3 generate line charts from a preloaded dataset (Gapminder) based on natural language instructions we are giving it.

You can even tell it to correct the plot, or change the columns being visualized!

Briefly, the Dash app lets you write a simple description, and GPT-3 can automatically generate the PX code to produce a bar chart for you:

hi, can you share the source code for this?

Really nice. Great job. I can see this being a really useful helper app for dash users where users can write what type of chart they want and this suggests the code and then you can copy and paste into your own app/notebook/etc. I would totally use it.

hi, can you share the source code for this?

We are currently in touch with OpenAI to ensure that we are releasing code that complies with their deployment conditions. Although I’d love to release the code for people to try out, it’s important to consider the broader impact of applications integrating GPT-3.

Really nice. Great job. I can see this being a really useful helper app for dash users where users can write what type of chart they want and this suggests the code and then you can copy and paste into your own app/notebook/etc. I would totally use it.

Thanks for the kind words! You can join the waitlist to access the beta API for GPT-3: https://beta.openai.com/

Hello all, I realized I didn’t share video links for the first and latest demo, so here are they are:

We are currently in touch with OpenAI to ensure that we are releasing code that complies with their deployment conditions. Although I’d love to release the code for people to try out, it’s important to consider the broader impact of applications integrating GPT-3.

thanks, it’s great to know you’d love to release the code, how can i have a try with it?

Hi @dingx! The live demos and source code are now released! I updated the main post with links to both of them for our two graph generation demos.

Let me know your thoughts!

By the way how was the loading feature implemented here.

How was the callback designed so that it loads based on the time it takes GPT-3 to return an output?

Trying to implement something similar.

Update: Nevermind got it

That said I wanted to know how to deploy the app with the API on heroku. Since the key is stored on my machine locally, how do demo the app without hard coding the key?

Hey this is pretty awesome. Thanks for sharing!
I just wanted to ask if this could be adaptec to gpt-2 or a variant thereof? I have not xet gotten an openai api key, so using a gpt2 would be more reach to do on your own

I think it should have some text generation capabilities, but definitely not as advanced as GPT-3. It should be fine for creating chatbots tho, similar to Dash Chatbot.

You can check try out GPT-2 here: https://transformer.huggingface.co/ and see if you can add some custom prompts.

Thanks! Got it working in Heroku though.

Feel free to share it as a Show & Tell!